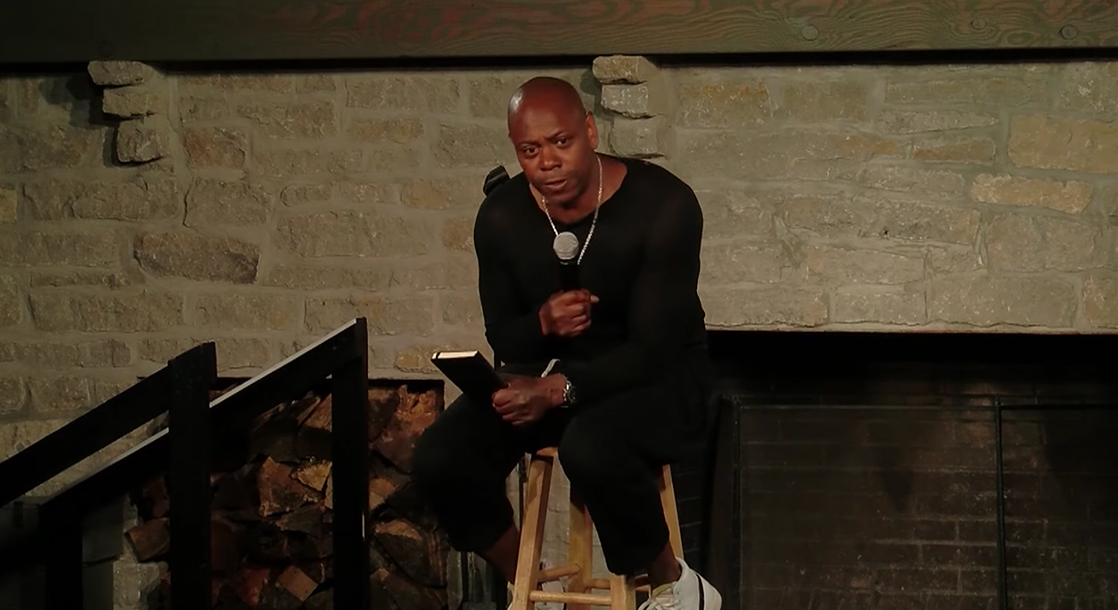 Late last night, June 11th, iconoclast comedian Dave Chappelle quietly dropped 8:46, a new 30-minute special billed as a “talk with punchlines.” The performance was recorded on June 6th in Dayton, Ohio, and at one point Chappelle tells the audience that the gig might be an entertainment milestone.

“I got to tell you, this is like the first concert in North American since all this shit happened, so like it or not, it’s history. It’s going to be in the books,” he says, referencing the coronavirus pandemic. But the set will be remembered for other reasons.

To quote Dave himself, “This is not funny at all. I got some pussy jokes, too, I can do…” Instead, he uses the platform to first commend protesters across the country (“You all are excellent drivers; I am comfortable in the back seat…”) before admitting his reluctance to speak out at all, as it might distract from the widespread activism.

Then, however, he does what Dave does best: embracing stand-up as “the last stronghold for civil discourse.” The comedian details the killings of George Floyd, John Crawford III, Michael Brown, Eric Garner, Trayvon Martin, Philando Castile and other people of color at the hands of law enforcement.

And interspersed among his recounting of those police-spurred tragedies, he describes fearing for his life during a 30-second earthquake, and compares it to the eight minutes and forty-six seconds that Minneapolis police officer Derek Chauvin kneeled on George Floyd’s neck. It becomes a parable: “What are you signifying — that you can kneel on a man’s neck for eight minutes and 46 seconds and feel like you wouldn’t get the wrath of god. That’s what is happening right now. It’s not for a single cop. It’s for all of it. Fucking all of it.”

Chappelle also rails against conservative media and the racist dog whistles emanating from broadcasters when describing the Black Lives Matter protests. He even details why he believes so-called pundits like Candace Owen are “the worst.”

“She told George Floyd’s rap record on the internet. ‘He was this… He was that… He was a drug addict. And he’s not a hero. And why does the black community make him a hero? Why did you choose him as a hero?’ WE didn’t choose him. YOU did. They killed him, and that wasn’t right, so he’s the guy. We’re not desperate for heroes in the black community. Any ***** that survives this nightmare is my goddamn hero.”

And when it comes time to address the silence from famous public figures and celebrities amid the protests, Chappelle doubles down on his support for the movement and activists across the country.

“‘Why isn’t David Chappelle saying anything?’ David Chappelle understands what the fuck he is seeing, and these streets will speak for themselves whether I am alive or dead. I trust you guys. I love you guys. We’ll keep this space open. This is the last stronghold for civil discourse. After this, it’s just “rat-a-tat-tat-tat-TAAAAT.” I love you very much. Thank you for being here. Goodnight.”

In less than 30 minutes, Chappelle demonstrates again why he is one of the most sharp and biting thinkers in American pop culture, and makes it palpable that 8 minutes and 46 seconds is anything but a mere timestamp.