As with everything that can be measured by weight — barbells, laundry, gummy bears, you name it — there are 16 ounces in a pound of marijuana. Seems simple enough, right?

For most of us, buying an ounce of weed is a considerable investment, and an entire pound is usually way beyond the scope of a typical consumer’s needs. In fact, it’s not even legal for a consumer or medical patient to pop into a dispensary and request a pound of pot.

Thankfully, there are more manageable and affordable measurements available at pot shops. That’s why it’s important to know how much flower is in a gram, eighth, quarter oz, half oz, and pound of cannabis, which is ultimately why we are breaking down this age-old question: How many ounces are in a pound of weed? 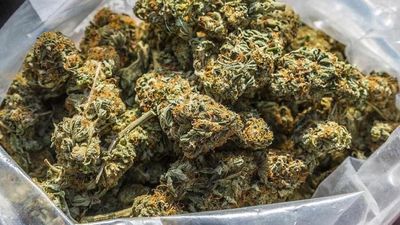 The simplest answer is that there are 16 ounces in a pound of anything — weed or otherwise. But remember that pounds and ounces are only used in the United States. Every other country in the world — except for Myanmar and Liberia — utilizes the metric system when calculating measurements, including weed amounts, too.

If you asked for an ounce of pot or a pound of weed at a dispensary anywhere else on the planet, you’ll likely be met with a perplexed stare. So, understand that this story addresses stateside cannabis quantities, specifically how many ounces are in a pound of pot.

But, let’s be real about something: The fact the US uses a pound as a basic unit of measurement is odd, and so is the fact that “pound” is abbreviated as “lb.” The word “ounce” is abbreviated as “oz,” which at least incorporates one letter that spells the original word. We share that info as something to ponder while stoned (which possibly may have been the case when somebody came up with those bizarre abbreviations).

Now, back to the question at hand: How many ounces in a pound of weed? Since there are 16 ounces in a pound, if you buy one ounce of weed, that’s 1/16 of a pound. As mentioned, though, a pound is more than what any average customer or patient would pick up from a storefront.

That’s why marijuana is usually sold in fractions of one ounce. Most often that’s an “eighth,” or a “quarter,” or a “half”— and, yes: That’s 1/8 of an ounce, ¼ of an ounce, and ½ of an ounce (no weird abbreviations necessary). 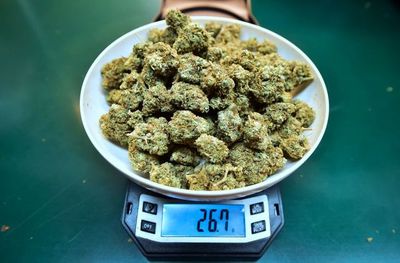 But What’s a Pound Broken Into in Grams?

Now we get to grams. There are 28 grams in an ounce and 448 grams in a pound. Marijuana is also bought and sold in gram units. Grams become especially important, however, when weighing your pot purchase to make sure it’s accurate.

Not only should you know how many ounces are in a pound, but you should be versed enough in grams to make sure the amount of marijuana you’ve got matches the money you spent on it. Scales are essential here.

Since we’re dealing with smaller weight, it’s necessary to use a scale specifically designed to measure such units. Tossing your stash onto a bathroom scale won’t suffice, at least not with accuracy.

Instead, you need a device that will clarify how many ounces in a pound, while also determining how many grams you just bought. When it comes to cannabis, those exact calculations matter. After all, don’t you want to get what you paid for?

Packaging also matters when weighing your weed. If you buy your buds pre-wrapped, measure out how much the bag or box weighs, then just subtract that number from the total. In the end, you’ll know exactly how much ganja you’ve got and accurately measure out how much you’re going to smoke during each sesh.

If you’re overwhelmed by all this number crunching, just remember: Knowledge is power, and an optimal cannabis experience — from purchasing to consumption to easing back and enjoying the goods — is one that is fully informed.

Once you understand how many ounces are in a pound, how many grams are in an ounce, the difference between an eighth and a half ounce, and so forth, consider yourself a master of marijuana math and blaze up accordingly. You’ll know exactly how much weed you’ve got to work with.