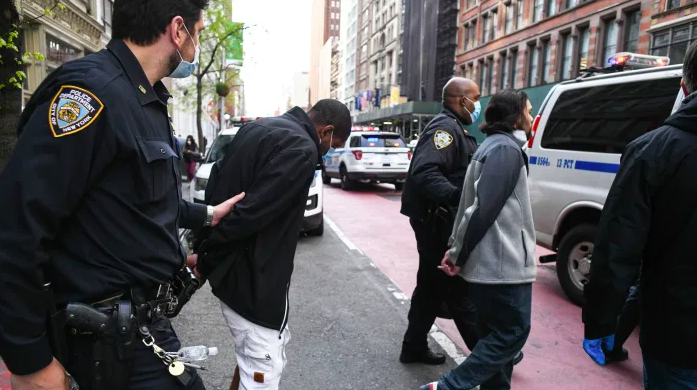 For the third year in a row, people of color still account for almost every single cannabis-related arrest made by the New York Police Department (NYPD).

The Legal Aid Society, an organization offering pro bono legal assistance to New York City’s most marginalized communities, is calling attention to new NYPD data showing that 94 percent of all cannabis arrests in 2020 targeted people of color. Last year, cops arrested 437 people for weed-related crimes, and only 20 of those people are white.

New York state decriminalized minor cannabis possession way back in 2014, but that detail never stopped New York City cops from busting people of color for weed. In 2017, the NYPD arrested 17, 800 people for possessing weed, and minorities accounted for 86 percent of those arrests. NYC Mayor Bill de Blasio has made constant, ineffectual promises that cops would start enforcing weed crimes fairly, but by 2018, the percentage of minorities busted for minor pot possession climbed to 93 percent.

The total number of annual weed arrests by the NYPD has truly fallen dramatically – from nearly 18,000 in 2018 to under 500 last year. City officials have directed cops to issue court summonses to people who are caught with weed instead of arresting them, but they are still primarily issued to minorities. Out of over 10,000 summonses issued in 2020, 6,147 were given to black people, 3,514 to Hispanic people, and 398 to white people.

According to a new report by Comptroller Scott Stringer, it now costs NYC $447,337 to incarcerate one person for a year, a 30 percent increase over 2019. “The cost to incarcerate a single individual on Rikers has exploded even as our jail population remains near historic lows – yet rates of violence continue to climb,” Stringer said, according to AMNY.

“That means we are spending more and more money to incarcerate fewer and fewer people and reducing the safety of both officers and people in custody in the process,” the Comptroller explained. “We must reimagine our criminal legal system, dramatically reduce the pretrial population, and invest our taxpayer dollars in the resources and programs—from housing to health care—that prevent incarceration in the first place.”

Even though the total number of weed arrests is dropping dramatically, NYPD officers have still been caught planting weed in people’s cars, and even brutally beating a man just for smoking a joint in a park. This makes it clear that decriminalization alone will not be able to stop the racially disproportionate enforcement of cannabis prohibition.

“The data affirm that New Yorkers of color are still overwhelmingly shouldering the brunt of the NYPD’s racist marijuana enforcement while other communities get a free pass,” said Anthony Posada, Supervising Attorney with the Community Justice Unit at The Legal Aid Society, according to AMNY.

“To correct the racist origins of the prohibition of marijuana that still very much exists today, Albany must enact the Marijuana Regulation and Taxation Act (MRTA) immediately to ensure that our clients, those from criminalized communities, will obtain equity, racial justice, and priority access to the benefits that legalization will create,” Posada added.

New York lawmakers have been debating adult-use legalization for years now, but have failed to compromise on a final piece of legislation. Now that neighboring New Jersey has legalized weed, Governor Andrew Cuomo is pushing lawmakers to actually pass the bill in 2021. Cuomo’s recent scandals threaten to derail these efforts, but according to insider reports, lawmakers are making good progress on advancing this essential legislation.