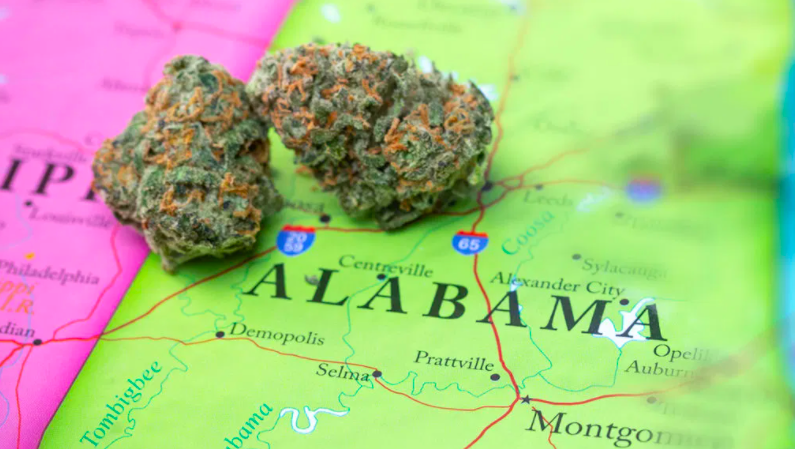 Alabama lawmakers just added an amendment to an opioid bill that would ban Delta-8- and Delta-10-THC products, alarming the state’s thriving hemp industry.

This February, state Rep. Mike Holmes (R) proposed HB2, a bill that would ban tianeptine, an antidepressant that can produce addictive, opioid-like effects at higher doses. Last month, the state House approved the bill with a unanimous vote and passed it along to the Senate. But when the bill came up for a hearing in the Senate Judiciary Committee, state Sen. Arthur Orr (R) added an amendment that would also ban Delta-8 and Delta-10 forms of THC.

Delta-8-THC and Delta-10-THC are natural cannabinoids found in all cannabis plants, including hemp and marijuana. The federal government and many states specifically prohibit Delta-9-THC, the best-known psychoactive component in marijuana, but these laws do not mention lesser-known forms of THC. Hemp plants can often contain up to 20 percent Delta-8-THC content and trace amounts of Delta-10, and since hemp is now federally legal, products containing these cannabinoids can be legally sold in the US.

“Delta-8 is a compound similar to delta-9 but with less psychoactive effects,” the National Cannabis Industry Association explained, according to the Alabama Political Reporter. “The hemp-derived delta-8 market has grown because delta-8 products can be delivered at near pure levels.” The National Cancer Institute reports that this cannabinoid has neuroprotective properties and can also reduce nausea, low appetite, anxiety, and pain.

In addition to providing a myriad of health benefits, Delta-8-THC can also provide a mellow, relaxed high that many describe as a perfect midpoint between THC and CBD. Over the past year, the market for Delta-8 products has grown rapidly, and these products are now available at hemp stores all across the US. The news that this cannabinoid is psychoactive has prohibitionists running scared, though, and now many states are working to ban it.

Alabama’s hemp industry is outraged at this backdoor attempt to ban one of their newest income streams. “We oppose this amendment,” the Alabama Cannabis Industry Association (ACIA) wrote in a blog post. “It’s premature to outlaw these potentially beneficial treatments for very serious conditions until research has been done. What we do know is that there have been no deaths attributed to Delta-8-THC and cannabis is generally safer than even some over-the-counter medications.”

The Alabama Senate recently passed The Compassion Act, a bill to legalize medical marijuana, and the ACIA is arguing that these Delta-THC variants should be added to that bill, instead of banned entirely. “To make these two delta chemicals illegal, the state will have [to] incur a cost to enforce it,” the group wrote. “That’s tax money that could go to roads. But, if it is included as a medical cannabis product and is legalized and controlled through The Compassion Act, the state will receive taxes from the sale of it.”

The state Senate Judiciary Committee approved HB2 with the amendment intact, but before this bill could become law, it would have to pass the Senate, and then have to be re-approved by the House. In the meantime, the House is currently debating the Senate’s medical marijuana legalization bill.

Delta-8-THC and other newly-discovered cannabinoids are also causing some headaches for states where weed is legal. These products do not fall under any state’s current cannabis regulations, so manufacturers are free to produce them without oversight and stores can sell them to minors. For this reason, Oregon and other states are now working on legislation to regulate these products.