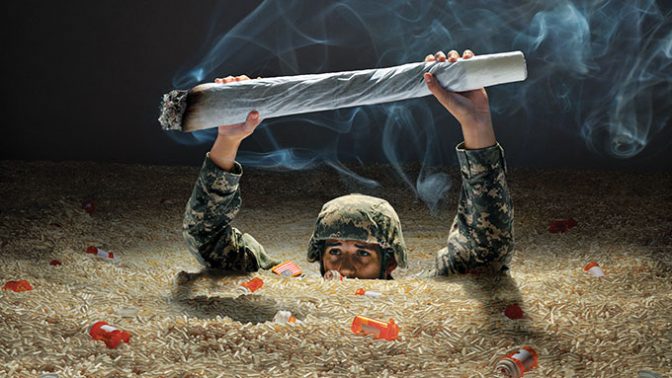 A coalition of Congressmembers have been working to grant military veterans the right to use medical cannabis for years now, but 2021 just might be the year that they succeed.

In 2018, Senators Brian Nelson (D-FL) and Bill Schatz (D-HI) filed the Veterans Medical Marijuana Safe Harbor Act, a bill that would allow Department of Veterans Affairs (VA) physicians to recommend medical cannabis to their patients. But, like every other cannabis bill introduced that year, GOP Congressional leaders killed it before it could come up for a vote. The lawmakers continued to reintroduce the bill each year, but it met the same fate.

Fast forward to 2021, and the Democrats have supermajority control of Congress and the White House, vastly increasing the chances that cannabis reform efforts could finally succeed. This month, the Safe Harbor Act has been reintroduced again, with strong bipartisan support. The House version of the bill is now sponsored by Reps. Barbara Lee (D-CA), Dave Joyce (R-OH), and 9 other cosponsors. In the Senate, Sen. Schatz is still the lead sponsor, along with Bernie Sanders and five other senators.

“It has been scientifically proven that medical marijuana has a considerable impact in treating conditions common with veterans when they return from service, like chronic pain and PTSD,” said Rep. Lee in a statement. “This legislation will empower veterans and their doctors to make informed decisions about the use of medical marijuana to treat chronic conditions in states with legal medical marijuana programs without federal interference.”

The current draft of the bill would make it legal for veterans to use and possess medical cannabis, as long as they are in compliance with their home state’s medical pot program. VA doctors are currently allowed to discuss cannabis with veterans, but the new law would officially allow them to write recommendations for medical cannabis.

The Safe Harbor Act would also require the VA to conduct research on using medical cannabis to treat chronic pain and reduce opioid abuse. To fund the research and policy changes, the bill would allocate $15 million in federal funding from the 2022 and 2023 fiscal budgets. This legislation would completely expire five years after being signed into law, unless renewed by Congress.

“There is a growing body of evidence about the beneficial uses of medical cannabis as treatment for PTSD and chronic pain, two terrible conditions that plague many of our veterans,” said Congressman Dave Joyce in a press release. “If a state has made it legal, like Ohio has, the federal government should not be preventing a VA doctor from recommending medical cannabis if they believe that treatment is right for their patient.”

Although veterans are currently able to seek out their own medical marijuana treatments without the help of the VA, they risk losing their federal benefits if they do so. Any veteran, or even any employee of the VA department, can lose loans, medical assistance, or other benefits if they are caught using cannabis, even if legal in their home state.

Earlier this year, Rep. Greg Steube (R-FL) proposed a bill that would block the feds from stripping veterans benefits over medical pot use. The Safe Harbor Act would ensure that veterans had even greater access to this essential medicine, though.