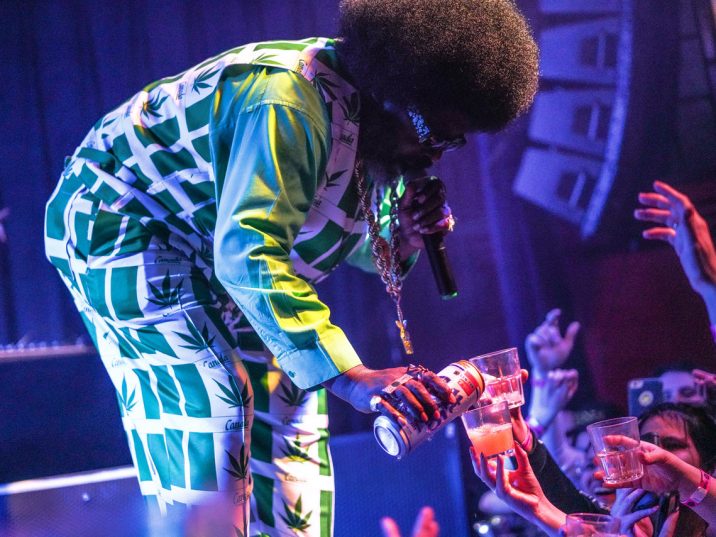 4/20 is primetime for Joseph Edgar Foreman, the Grammy-nominated multi-instrumentalist and rapper-songwriter, known as “Afroman” to legions of cannabis enthusiasts. True to the nature of his decades-long career, Foreman spent the week bopping from Oklahoma to Michigan to perform for weed-loving crowds anxious for his now-classic ode to the things that marijuana makes you forget to do.

(Did we mention that when we saw him live back in 2002 [we’re old] he played “Because I Got High” twice in the same set? This man deserves all the high-holiday gigs.)

Not all was smooth smoking during the legend’s 4/20 week. Organizers of Afroman’s Tuesday concert at Cass County, Michigan’s M-40 Speedway failed to get a permit to allow cannabis consumption at the event.

Fans left angry Facebook comments and then organizers got scolded and low-key accused of selling illegal drugs by law enforcement.

“Those requirements are very basic,” Cass County prosecutor Victor Fitz told a local news site. “It’s basic grown-up stuff. You need to have a license and make sure that you have expressed permission from the township if you are planning to have marijuana use. And if you comply with that, you will be fine, and if you don’t then there are potential criminal consequences…Some of the organizers have been active in the marijuana promotion, as far as recreational meth…So I think there are some logical inferences that were made. That’s why communication is sometimes a good thing.”

“We never wanted to give the wrong impression,” said one of the event’s organizers Justin Smith. “This is strictly a music concert.”

Nevertheless, according to a highly inappropriate IG post from Afroman himself, the show was sold out at the racetrack.

Which only seems right, given that Foreman took a chance with his own safety when he penned “Because I Got High.” In 2014, when he remade the single, he wrote an essay for Vibe Magazine on the song’s origin story:

“I wanted to write a pro-weed song but still feel the police will hassle me even more. They could exaggerate and say I’m disturbing the peace and inciting a riot. You know like the classic crooked cops on TV that hit your head light with their nightstick then tell you that your head is busted. Those types of cops do exist.”

That 2014 “Because I Got High” Positive Remix further established Afroman’s status as a cannabis hero. He released a video in collaboration with NORML’s Smoke the Vote campaign and Weedmaps — and most importantly, switched up the lyrics to reflect the positive benefits of cannabis consumption, from glaucoma relief to tax windfalls for state governments:

“They built a school or two/Because I got high/Now the state can fund drug treatment/And I know why,” went the re-do.

So it was a relief to get a sign that Foreman’s gusto was hardly dimmed by the racetrack snafu. He posted a photo of himself surrounded by women in a floor-length white coat, purple “mudflap woman” print suit, and a matching goblet yesterday, its caption calling this year the “best 4/20 I’ve ever had.”