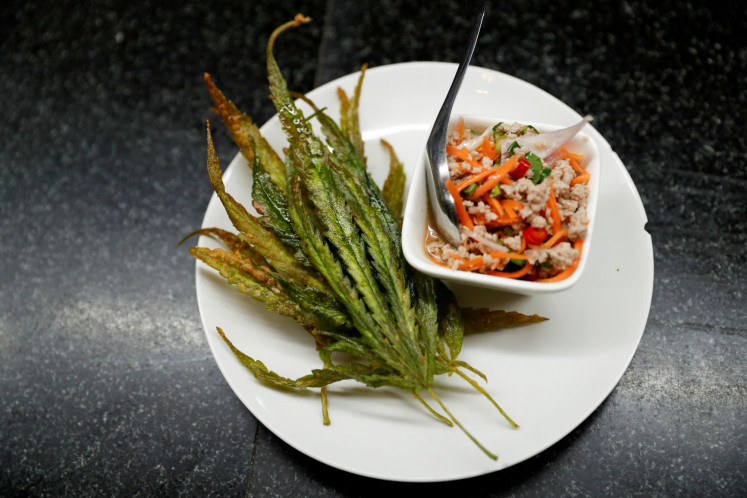 Amidst a changing cannabis cultural landscape, Thai restaurants are re-discovering an innovative benefit of using ganja in the kitchen, PRI’s The World reports. Chef Amara Akamanon of rural restaurant Baan Lao Ruang (which translates to “The Storytelling House”) located in Prachinburi is employing glutamic acid-rich cannabis leaves for the umami mouthfeel they give to her dishes — an apt substitute, she says, for monosodium glutamate, or MSG.

(It’s important to note that, while the return of global cannabis cooking heritage is rad, MSG-hate has largely been exposed as based on anti-Asian stereotypes more than any real health concerns.)

Baan Lao Ruang has an older customer base, who aren’t coming to get high — which is probably for the best, as THC-heavy cannabis is still illegal in the country, despite the limited medicinal marijuana regulations. But at the same time, the death penalty remains as a possible sentence for drug trafficking.

“You might feel uplifted by my food,” said Akamanon, who was able to get a license through an association with an herbal medicine-focused hospital. “Your mood might improve. Maybe you’ll get the giggles. You will relax, sleeping better that night.”

What’s weedy and on the menu? Akamanon serves, “stir-fries, rich curries, tom yum (a classic Thai sour soup) and even tempura-fried cannabis leaves,” according to The World. Some plates come garnished with the recognizable leaves themselves. You can even sip on a tea and passionfruit beverage at Baan Lao Ruang that includes juiced leaves.

Thailand has a formidable legacy as a center of cannabis culture, as anyone familiar with the famous Thai Stick ganja from the 1970s and ‘80s can tell you. In fact, this tradition goes far beyond one particular cultivar.

Cannabis has been used in traditional medicine for centuries — famously, in the kitchen of pork “boat noodle” vendors, who have been known to add cannabis leaves to their dishes. Bangkok noodle chain Rod Dee Ded now proudly adds the plant’s stems and roots to its broth in a nod to owner Sittichan Vuttipornkul’s familial cooking traditions.

The plant shows up in the country’s first known cookbook, 1908’s Mae Krua Hua Pa, in the form of “tender ganja leaves.” The drug became illegal in the country in 1934, mainly due to international pressure.

The use of medical cannabis oil by licensed health facilities was legalized in the country in 2018, making it the first Asian country to do so. At the end of last year, the drug was rescheduled, and non-flower parts of the plant containing less than .2 percent THC became regulated. More guidelines around cannabis research and cosmetic and food manufacturing were announced in March, and six plants per household are now allowed for home cultivation.

Health minister Anutin Charnvirakul, who hails from the Bhumjaithai Party that forms part of the political coalition currently in power, has made a habit of advocating for legalization and even posing with cannabis plants for photo ops. He calls the prospect of regulation, “a win-win for the Thai people because they will grow the plant, and it will benefit the economy.”

Akamanon told The World that cannabis has gone from “medicine to some terrible narcotic and back to medicine again.” Time will tell where Thai marijuana history goes from here.