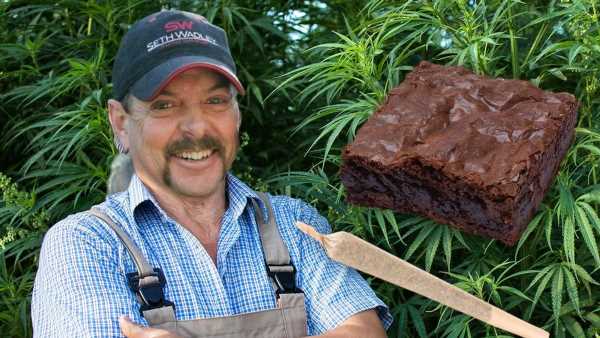 We did it Joe? Incarcerated reality TV inferno Joe Exotic has announced that a new cannabis line will be released with his name on it. Not too many details have been released about Joe Exotica Cannabis — we discovered this news thanks to a TMZ report via Benzinga. But Brad Smalls, the guy’s lawyer, did drop a few hints about what to expect, including that CBD edibles will be available in dispensaries around California, Colorado, and Oklahoma — Exotic’s home state.

The deal has been executed through Tango Hotel Charlie Group, LLC and Cannaxxs LTD, with Exotic overseeing the deal via phone calls from prison.

“Small says the launch will happen within weeks, and a share of Joe’s profits will go towards captive tiger care.”

Ah, yes, tiger care. That reminds us: Joe’s prison sentence, unlike that of many people who we cover on this site, was not due to racially-biased Drug War policing (like that of Mississippi lifetime sentence recipient Allen Russell). Rather, he’s imprisoned due to the far more reprehensible fact that he abused and even killed tigers, and attempted to pay to have a human being murdered (albeit, clumsily if you’ve seen Tiger King).

In case you think those tiger-cruelty allegations were a fantasy drummed up by Exotic’s rival and nemesis Carole Baskin — the judge found Exotic guilty of 17 federal charges of animal abuse and two counts of attempted murder for hire — here is National Geographic’s coverage of his sentencing:

“Joe Exotic was convicted of killing five tigers, shooting them in the head to make room for other cats. He sold and trafficked tigers and other endangered species and falsified government documents to hide his activities in violation of federal laws.”

Exotic had long been an Oklahoman legend due to his larger-than-life personal stylings and Greater Wynnewood Exotic Animal Park, where visitors could cuddle actual tiger cubs. He rose to international fame when a Netflix series about his life called Tiger King dropped right at the start of the COVID-19 pandemic, an optimal moment for binge-watching if ever there was one.

News of his weed dealings dropped on the same day as an announcement that Exotic would be hawking “Joe Exotic cryptocurrency themed digital artworks(?),” presumably NFTs related to “digital Tiger King tokens and real-world collectibles.”

“Being able to auction off collectibles makes me feel connected with the outside world, especially without my cats by my side,” Exotic said in a press statement, as reported by Gizmodo.

It would seem that the man is in search of funds.

Indeed, TMZ says Exotic calls his life a “living hell,” suggesting that cannabis and NFT money could alleviate that. He is reportedly lobbying the Biden administration for a pardon, since things didn’t turn out to his liking when he tried to cozy up to the Orange One for a similar pass. Exotic says he was “too innocent and too GAY” for Donald Trump to pardon him, and Trump for his part called Exotic “a strange guy” who had “a lot of strange people surrounding him.”

Sorry to quote a man who should never be heard from again — but we trust a twice-impeached president to know about unsavory hangers-on.