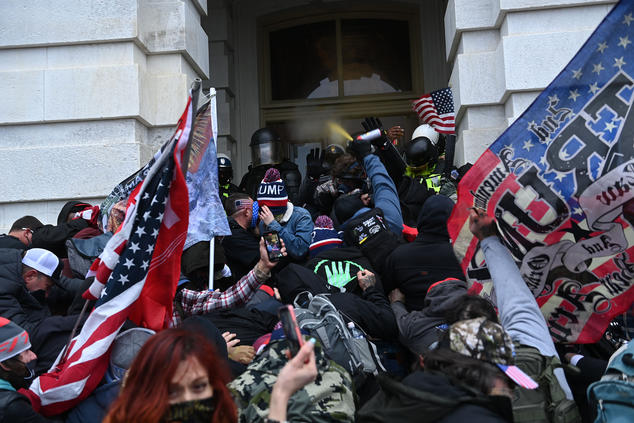 Image via (Also, note the person spraying the can)

The lawyer of an insurrectionist who entered the US Capitol on January 6th may be gearing up to argue that his client’s crimes were committed under the influence of marijuana.

Here’s what the lawyer representing Robert Gieswein (24) — who has six felonies stacked against him, mind you — stated in a motion about his client’s actions the day before the Capitol attack, according to Leafly:

“Mr. Gieswein was at Freedom Plaza in the District along with other Trump supporters. He was approached by someone with a video camera, who engaged him in conversation. He had just smoked a significant amount of marijuana, and his intoxication is palpable in his dilated pupils and grin, and in the rambling comments that ensued. Asked why he had come, he said ‘to keep President Trump in.’ But he did not describe any particular plan, least of all a plan to engage in violence.”

Based on this logic, if the Coloradan was smoking weed then he wasn’t capable of planning an insurrection. Riiiiight.

Certainly, cannabis use seems to have been a running theme among the people who attacked the Capitol that day. Eduardo Nicolas Alvear González earned his moniker “Capitol Rotunda Doobie Smoker” by talking about what strain he was smoking as he stood under the Capitol’s famous dome. A photo by French news service staffer Saul Loeb — who got some of the day’s most iconic shots — shows a woman in a MAGA hat carrying a whole ass American flag on a pole, vaping an unidentified substance as she goes through someone’s stuff on a desk in Nancy Pelosi’s office.

In Gieswein’s case, the defense team might have a hard time proving he was too stoned to function. The day after his Freedom Playa high, he was at the January 6th rally-turned-failed-coup.

According to the federal charges against him, he was wearing a “full paramilitary-style kit, including a helmet, flak jacket, and goggles,” and carrying a spray can of chemical irritant and a baseball bat.

Though his lawyer goes on to say that he was, “materially less violent and troubling than many others at the Capitol on January 6th,” Gieswein is in fact accused of spraying Capitol police with chemical irritant — thought to be oleoresin capsicum (“OC”) spray — three times, and also threw punches at a cop for good measure.

The man is also accused by the feds to have “entered through the first broken window on that building just moments after it was broken with a stolen police riot shield,” around 2:14 p.m. on the day of the attacks, suggesting he played a leading role in the day’s violence.

His six federal felony charges include assaulting, resisting, or impeding officers with a dangerous weapon; destruction of government property; and entering and remaining in a restricted building with a deadly weapon.

The prosecutor notes that Gieswein has suggested that he brought his weapons to use “against Antifa,” but that, “There is no evidence that ‘Antifa’ was even present at the times the defendant deployed his spray.”

Giewein turned himself in to Colorado’s Teller County jail on January 18, telling people on site that he was a “constitutionalist,” had done nothing wrong at the Capitol that day, and “mentioned that he basically wanted the military to take the country over and restore the Constitution.”

Kind of hard to blame that on weed — but also a good time to note that using cannabis hardly determines one’s political views.