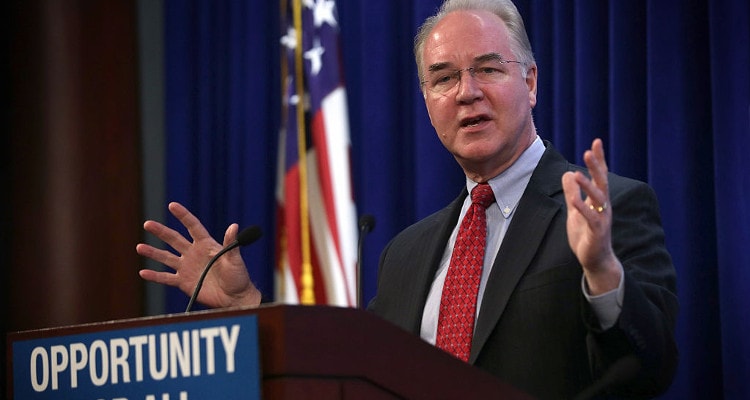 A former Trump official and Congressman who spent his career fighting against medical marijuana just set himself up to profit from a brand new medical cannabis company in his home state of Georgia.

Last month, the Georgia Access to Medical Cannabis Commission granted medical cannabis production licenses to six out of 69 applicants. These six winners will now be able to legally manufacture, produce, and sell low-THC cannabis oils under the state’s limited medical marijuana program. Among these, the state awarded two Class 1 licenses allowing businesses to grow up to 100,000 square feet of medical pot and four Class 2 licenses with a 50,000 square-foot cap.

When the winning applicants were announced, local advocates were shocked to discover that Tom Price, a career Republican politician and staunch opponent of cannabis reform, is on the board of directors of Botanical Sciences, LLC, a company that won one of the two coveted Class 1 licenses.

“As a dad of medical cannabis patient, a parent that spent seven years at the Georgia Capitol lobbying to try to pass a medical cannabis program, I can only start to express my disappointment when I found out that Tom Price was on the board of directors of Botanical Sciences, one of the companies that received a class 1 license to cultivate and distribute cannabis here in Georgia,” said Sebastien Cotte, co-founder of local advocacy group Georgia’s Hope, to Marijuana Moment.

Price served as a Georgia state Senator from 1997 to 2003, and as a member of the US House of Representatives from 2005 to 2017. In 2017, former President Trump appointed him to head the US Department of Health and Human Services (HHS), but he resigned after journalists learned he spent over $1 million worth of taxpayers’ money on private jets for his own personal travels.

During his time as a member of Congress, Price established a solid reputation as a fervent prohibitionist, voting against amendments to protect state-legal medical marijuana programs from federal interference on six separate occasions. He also voted against amendments that would have allowed US Department of Veterans Affairs doctors to recommend medical pot to veterans. And in his brief stint as head of HHS, he took no action to advance medical cannabis reform.

But now, after this career of fighting against medical cannabis, Price has set himself up in a position to comfortably collect cash from Georgia’s potentially lucrative new market. And his wife Betty, a former Georgia state lawmaker who actually voted against the state’s medical marijuana law, may also benefit from her husband’s involvement in the weed industry.

“Tom Price at the federal level and his wife Betty Price at the state level have been strong opponents of cannabis for years,” said Cotte to Marijuana Moment. “They did all they could to not only destroy our grassroots efforts in Georgia but they also tried to put every medical cannabis program in the country in jeopardy.”

“To think that someone so anti-cannabis is now on the board of a company that received a license and that he will be able to financially benefit from medical cannabis sales in Georgia is truly sickening and a slap in the face of every [parent, patient and advocate] who fought so hard for the past seven years to bring a medical cannabis program in our state,” Cotte added.

Price’s sudden switch from hardcore prohibitionist to weed industry mogul strongly recalls a similar transition by former House Speaker John Boehner (R-OH). Boehner actively fought against cannabis reform in Congress, and spoke out against legalization as recently as 2015, but snapped up a $17-million-plus investment in a major national weed company as soon as he recognized the financial potential of the cannabis industry.